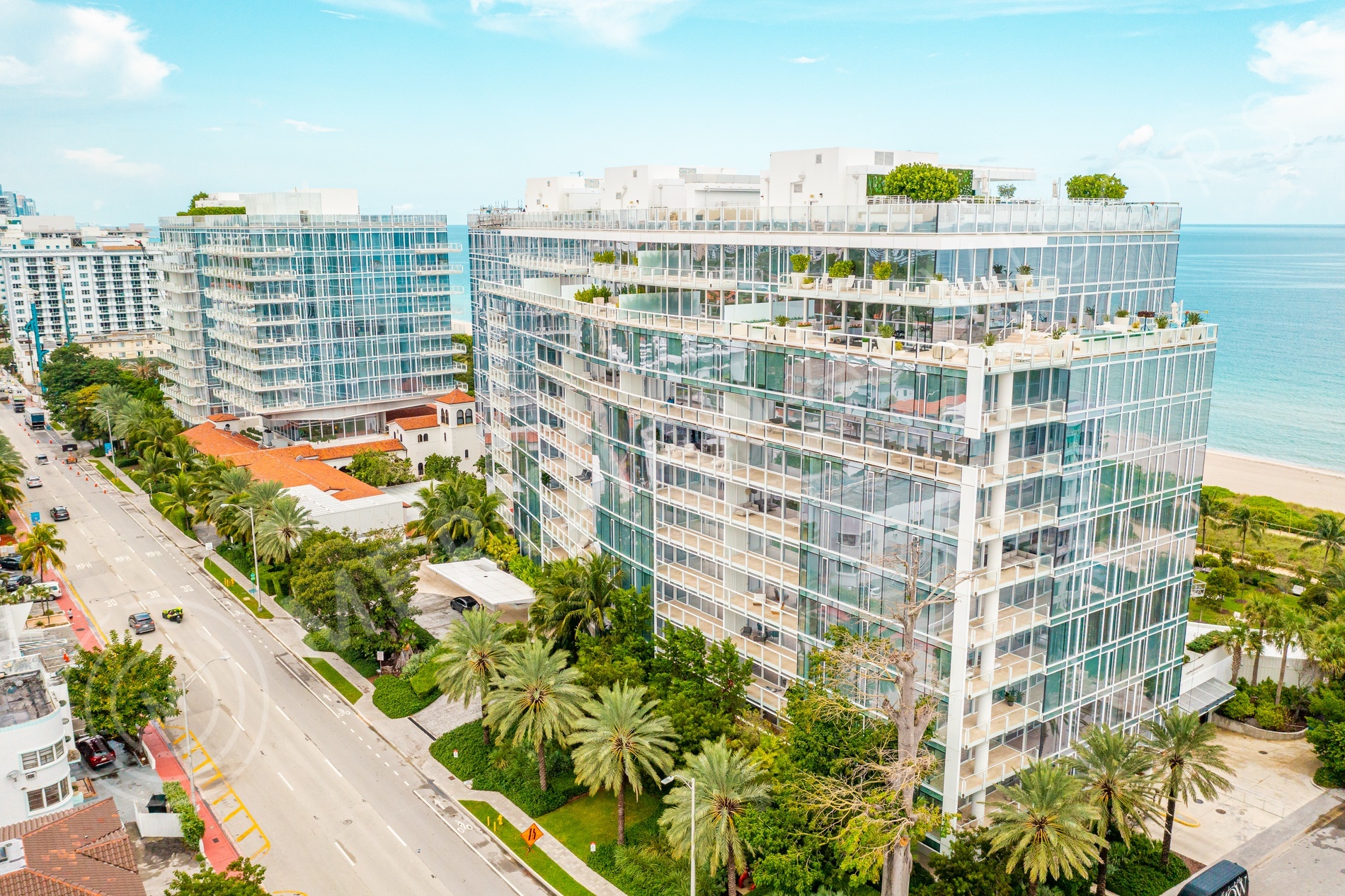 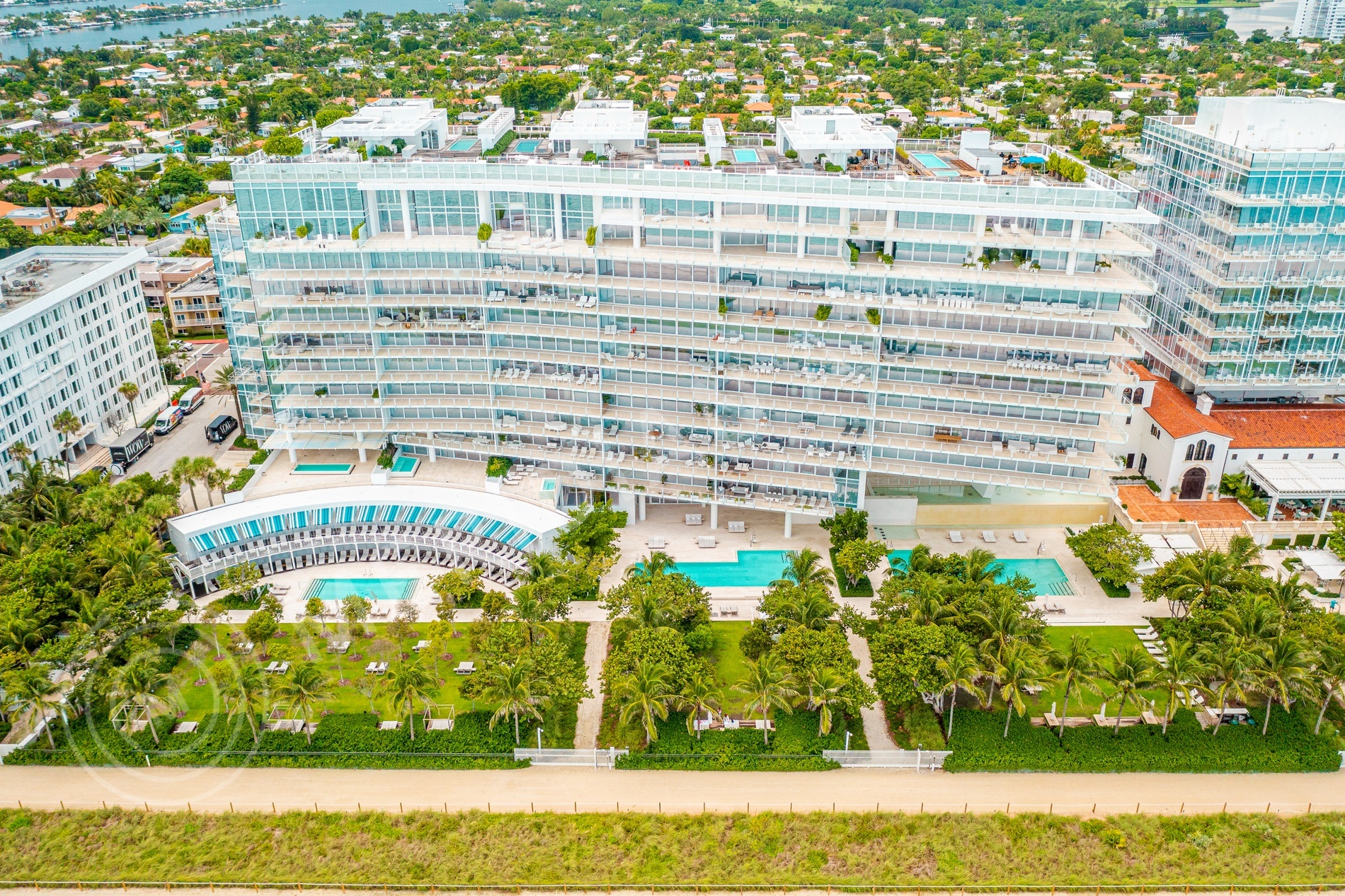 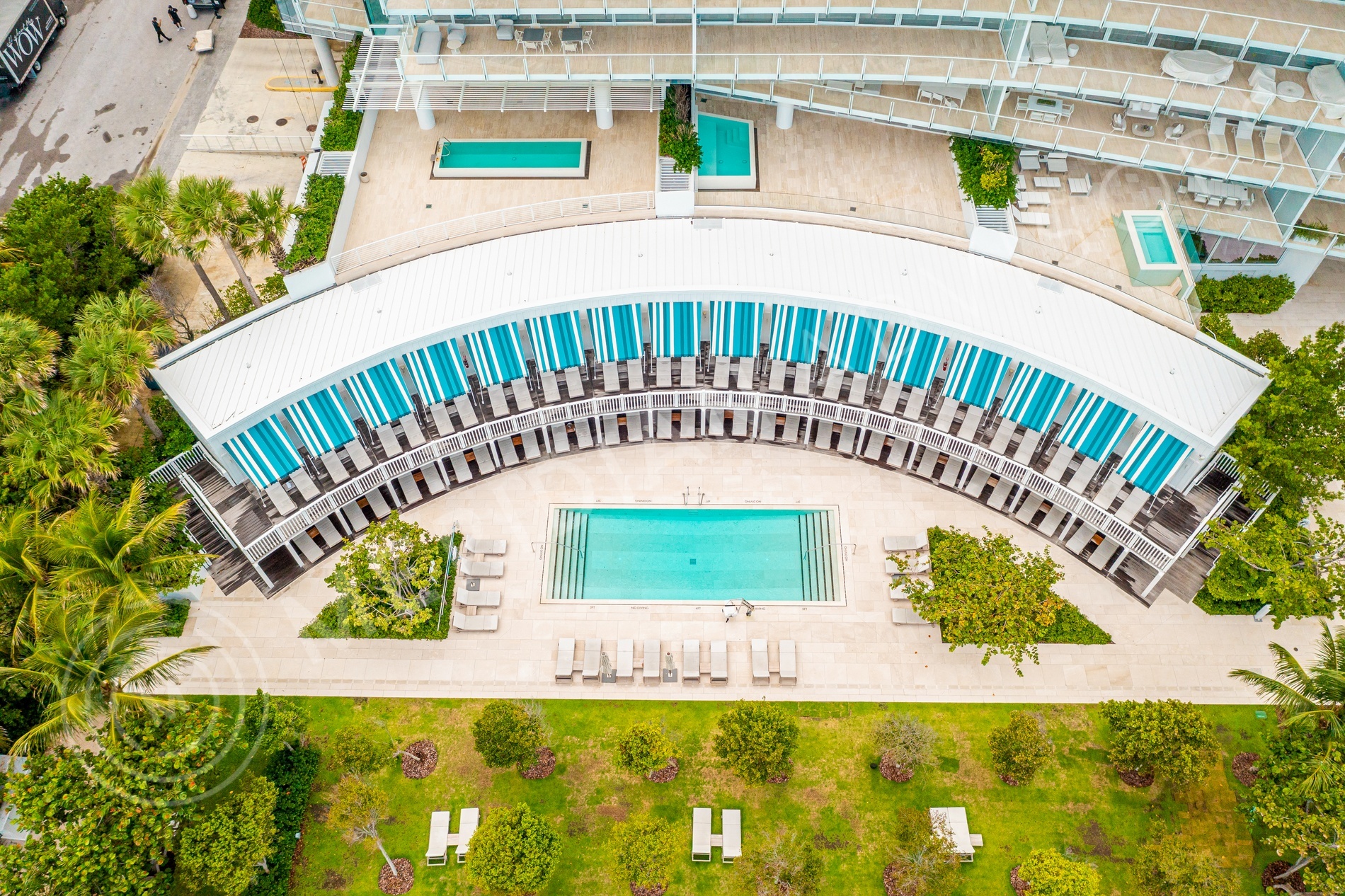 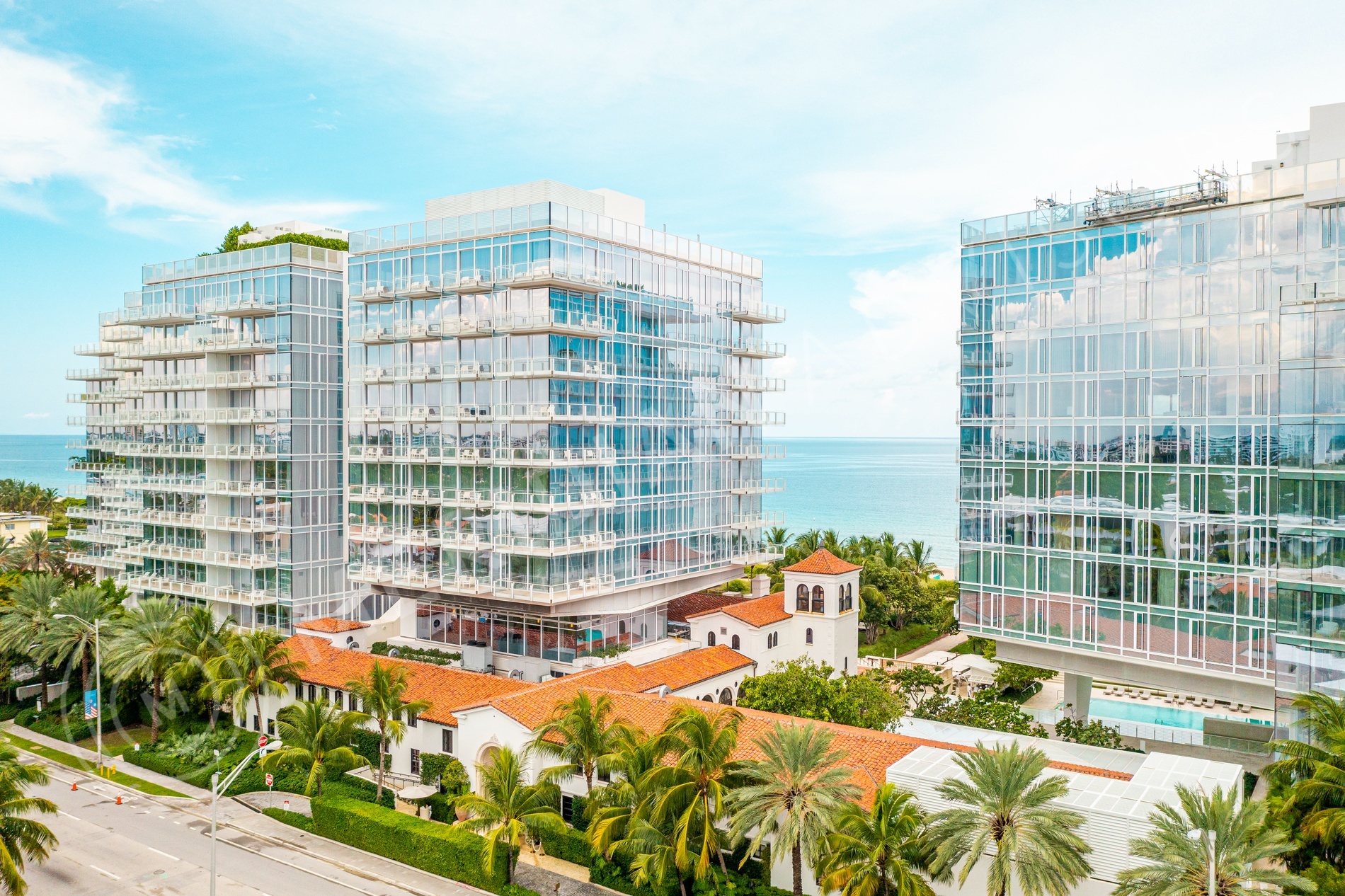 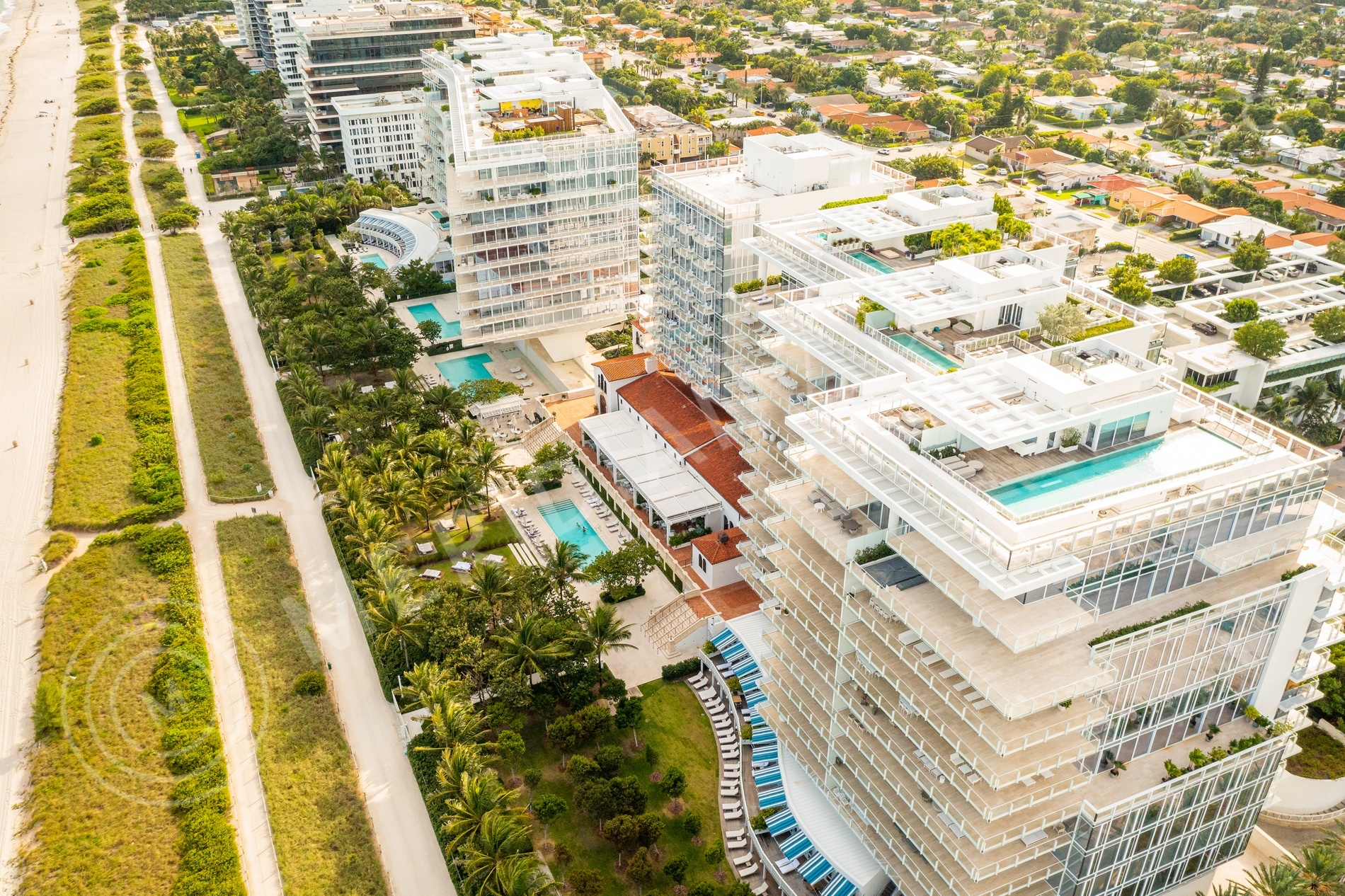 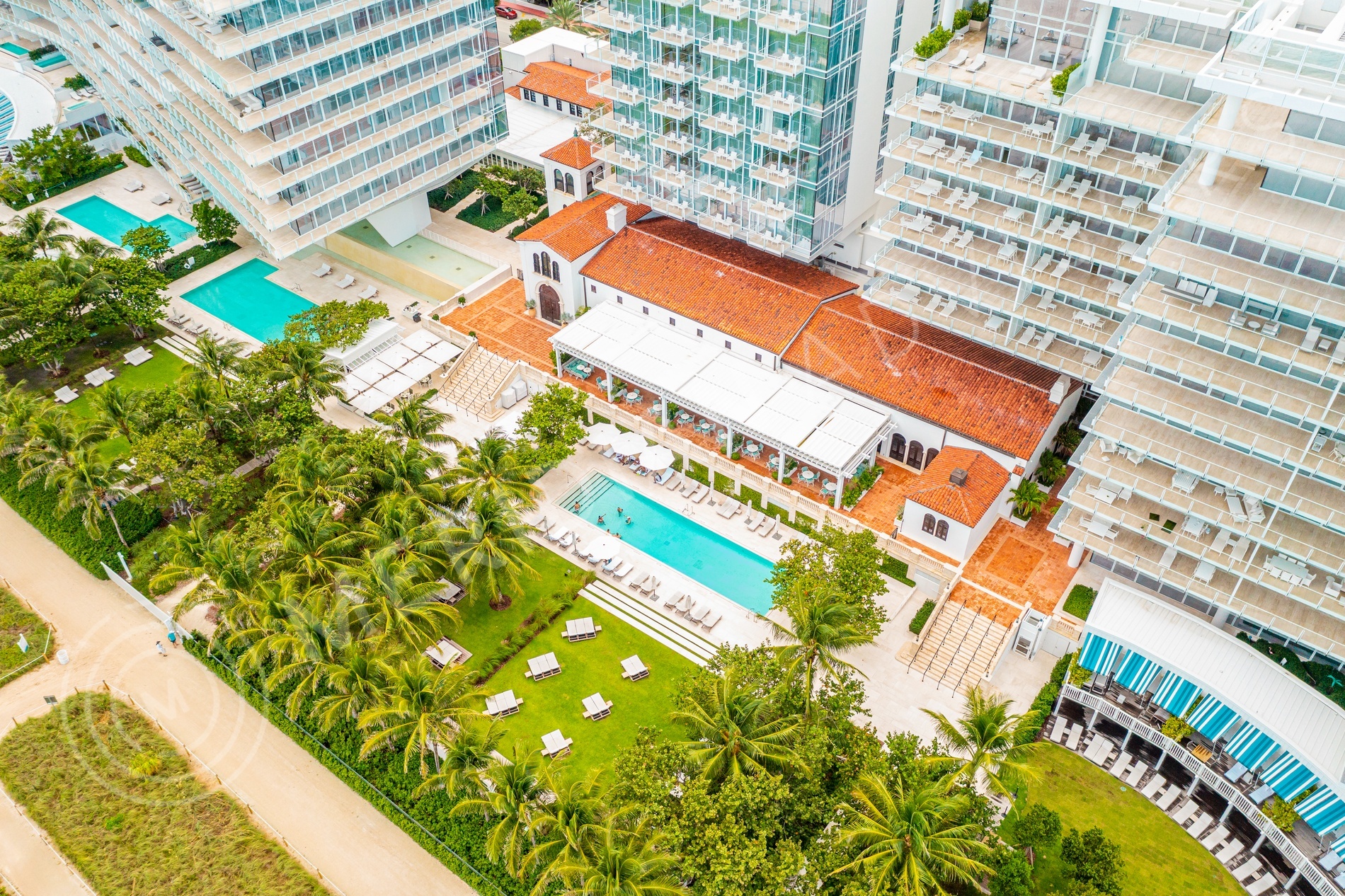 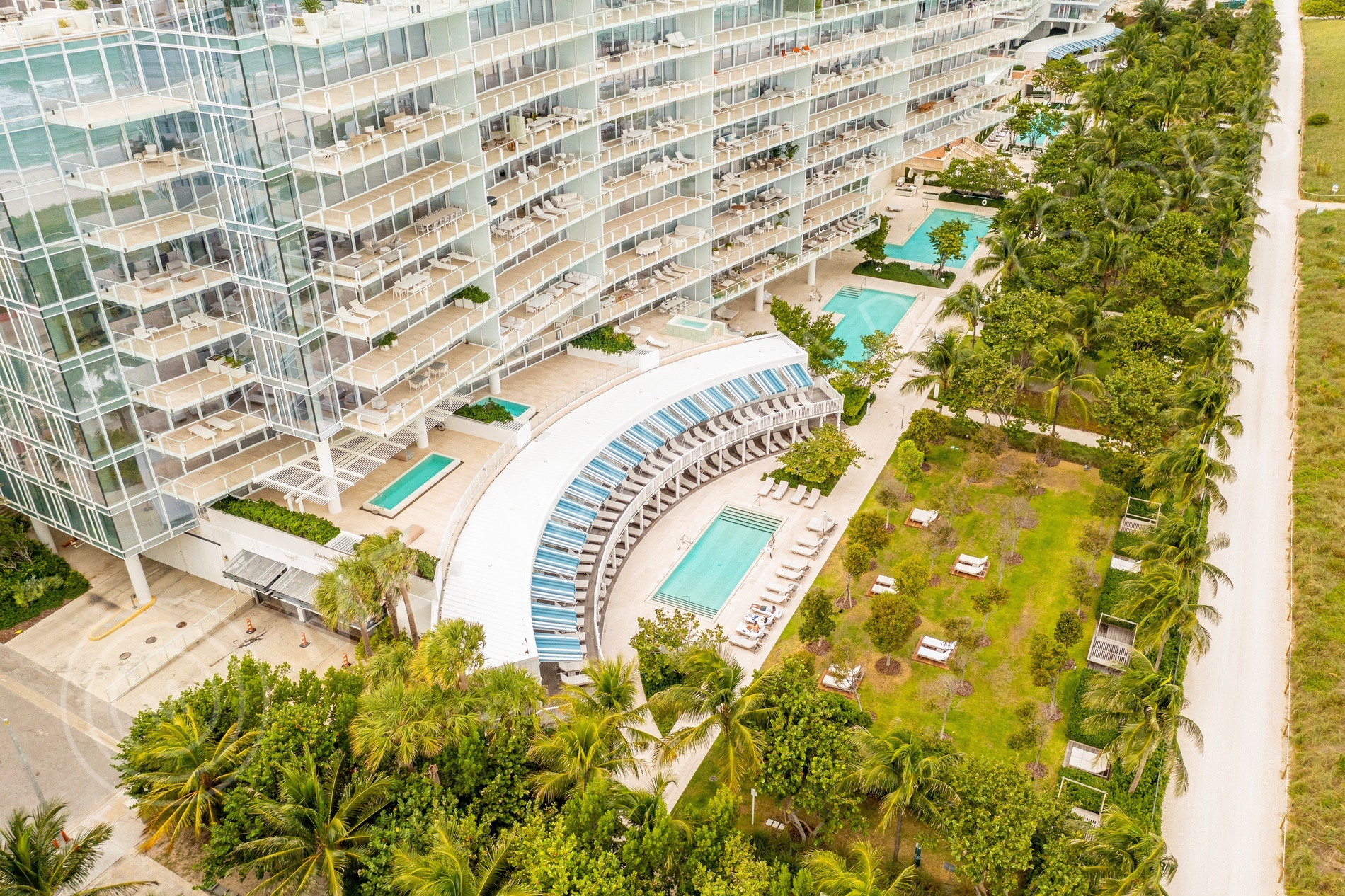 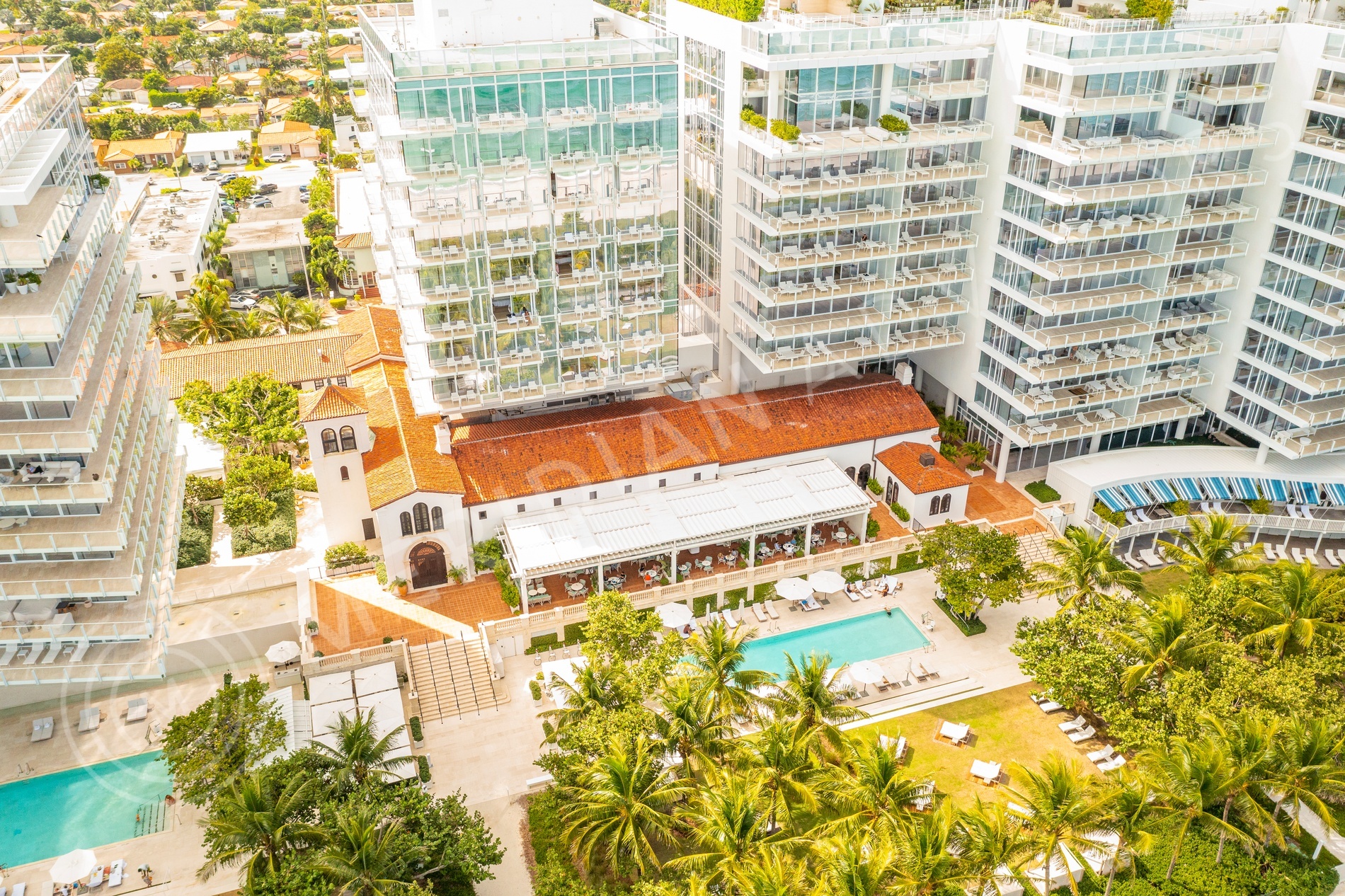 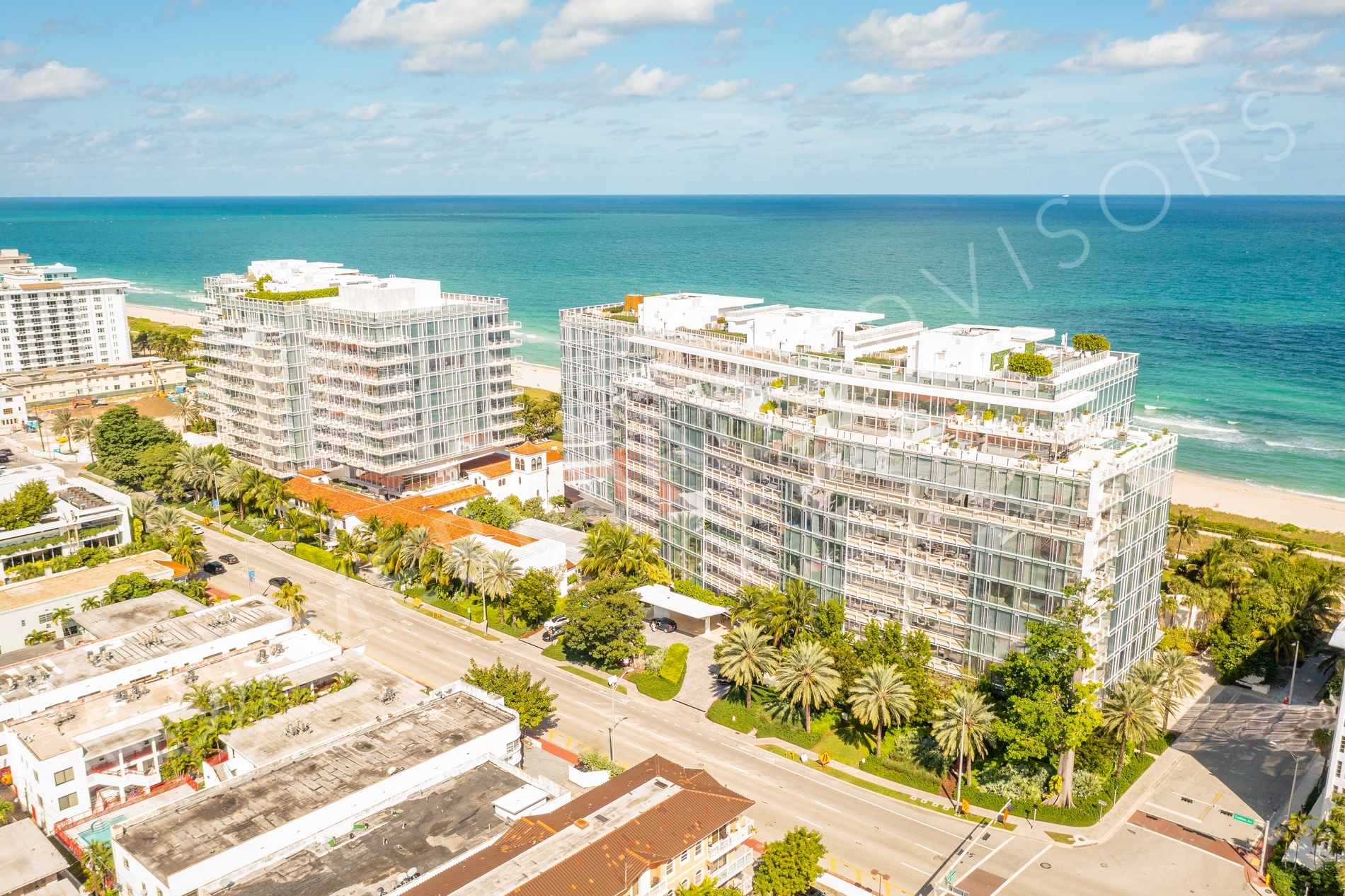 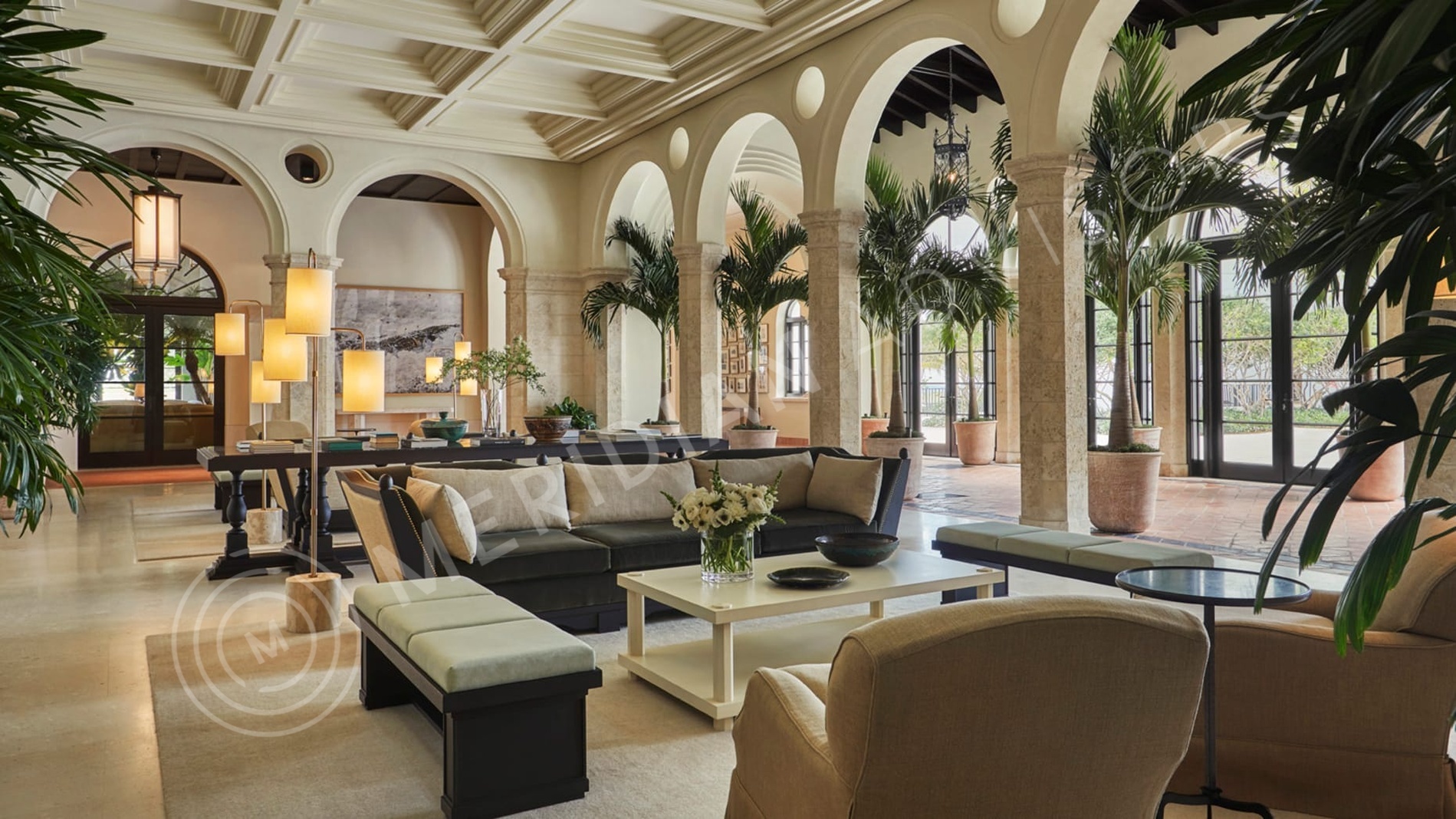 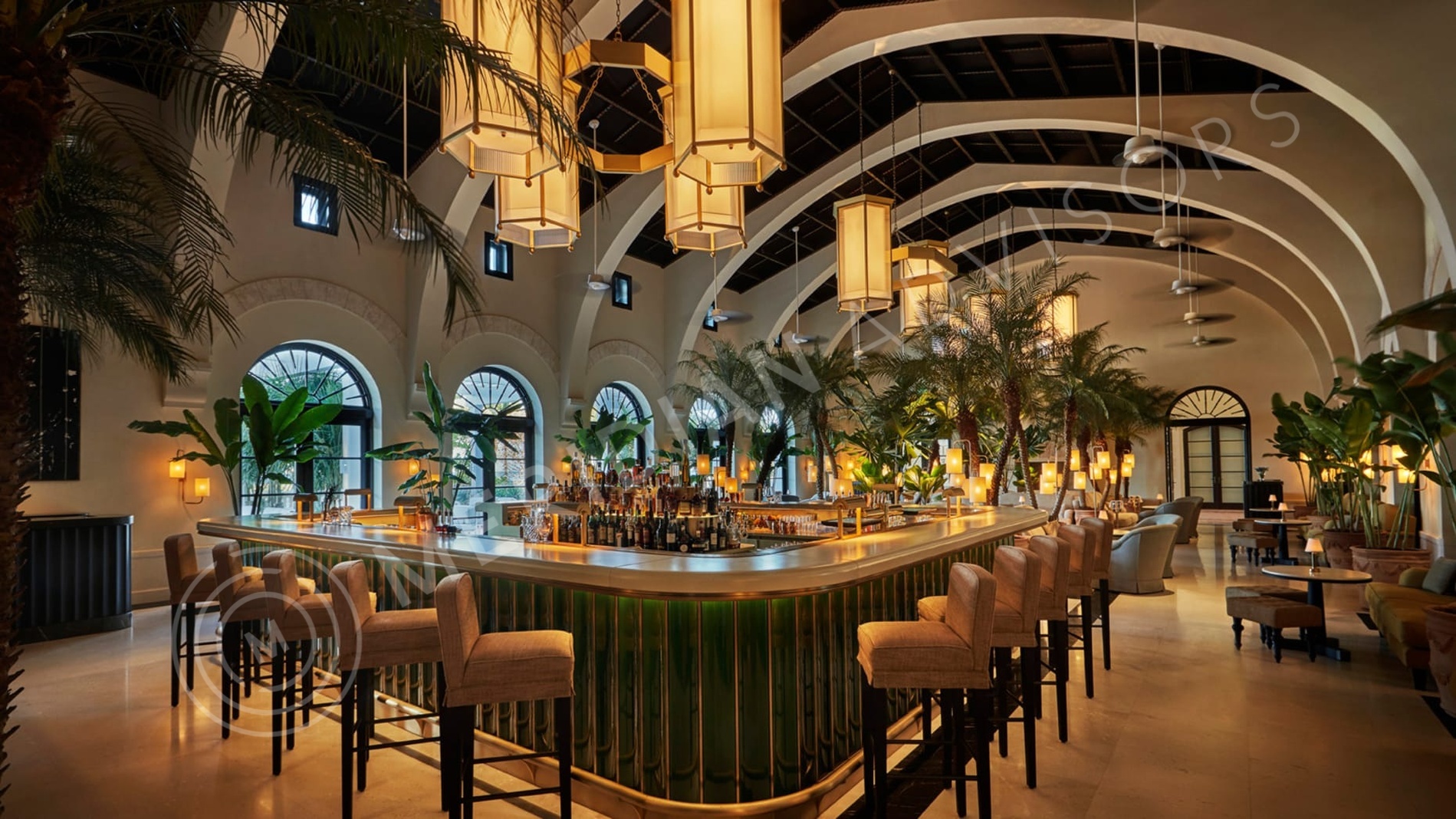 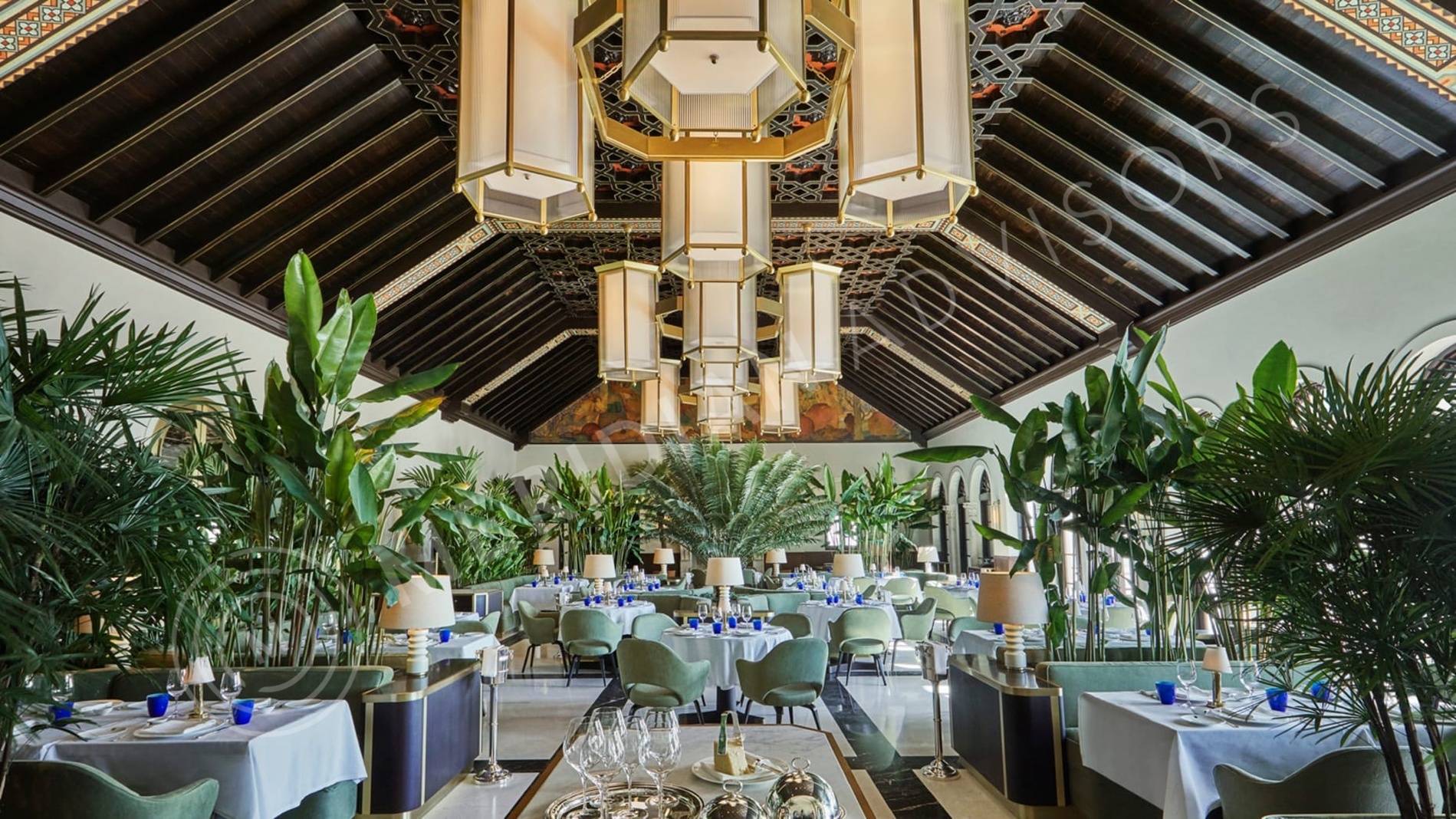 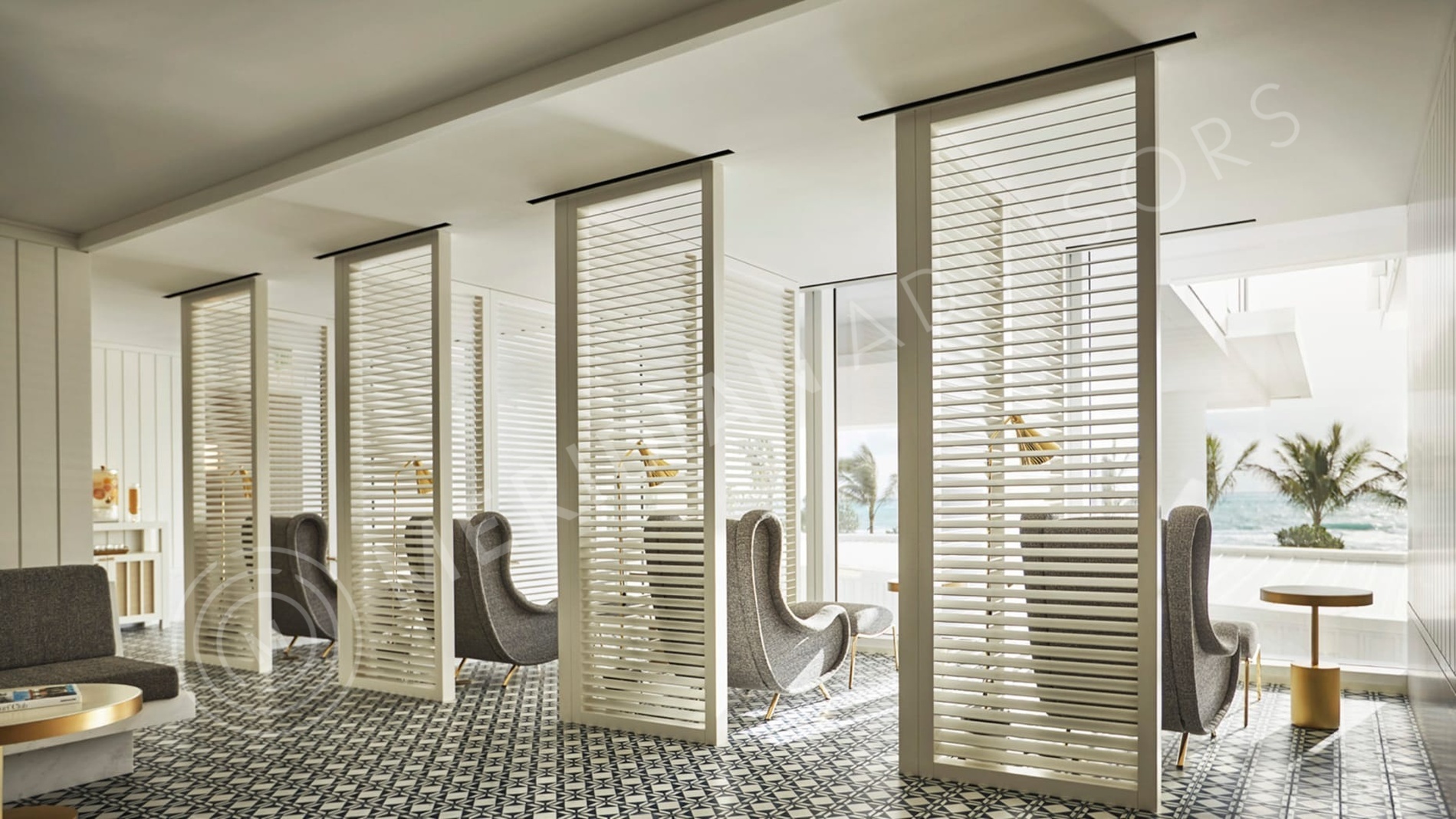 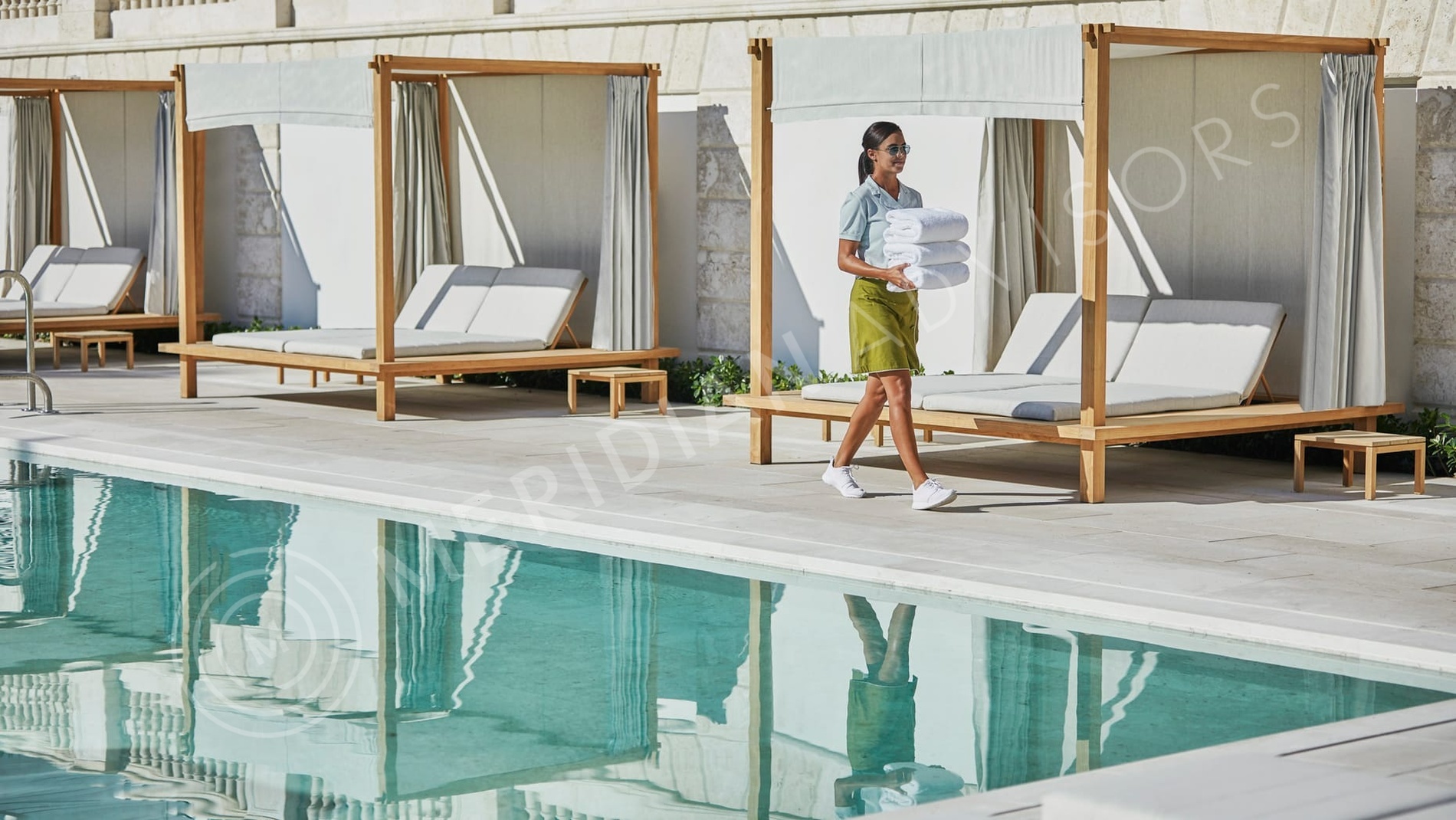 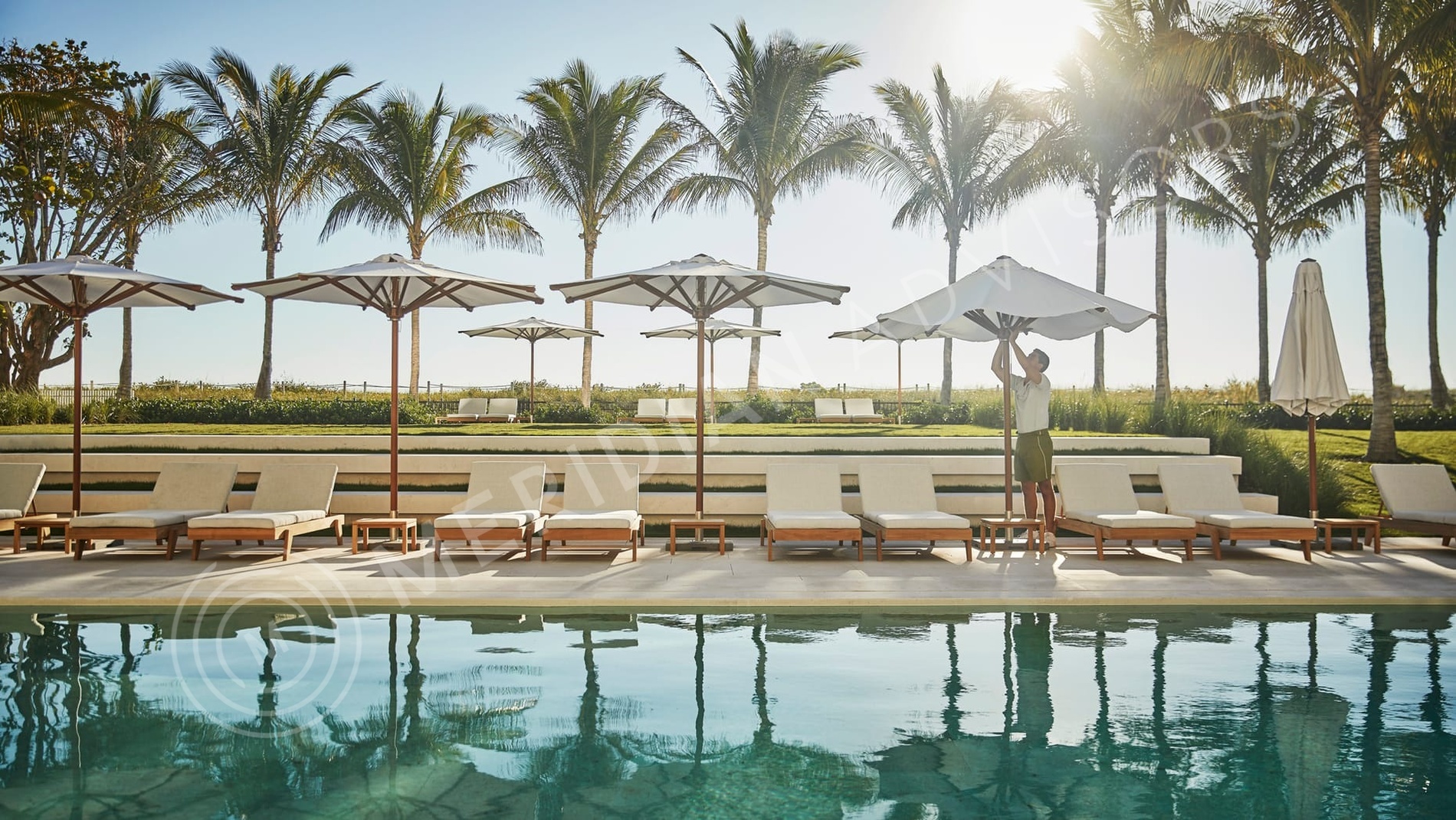 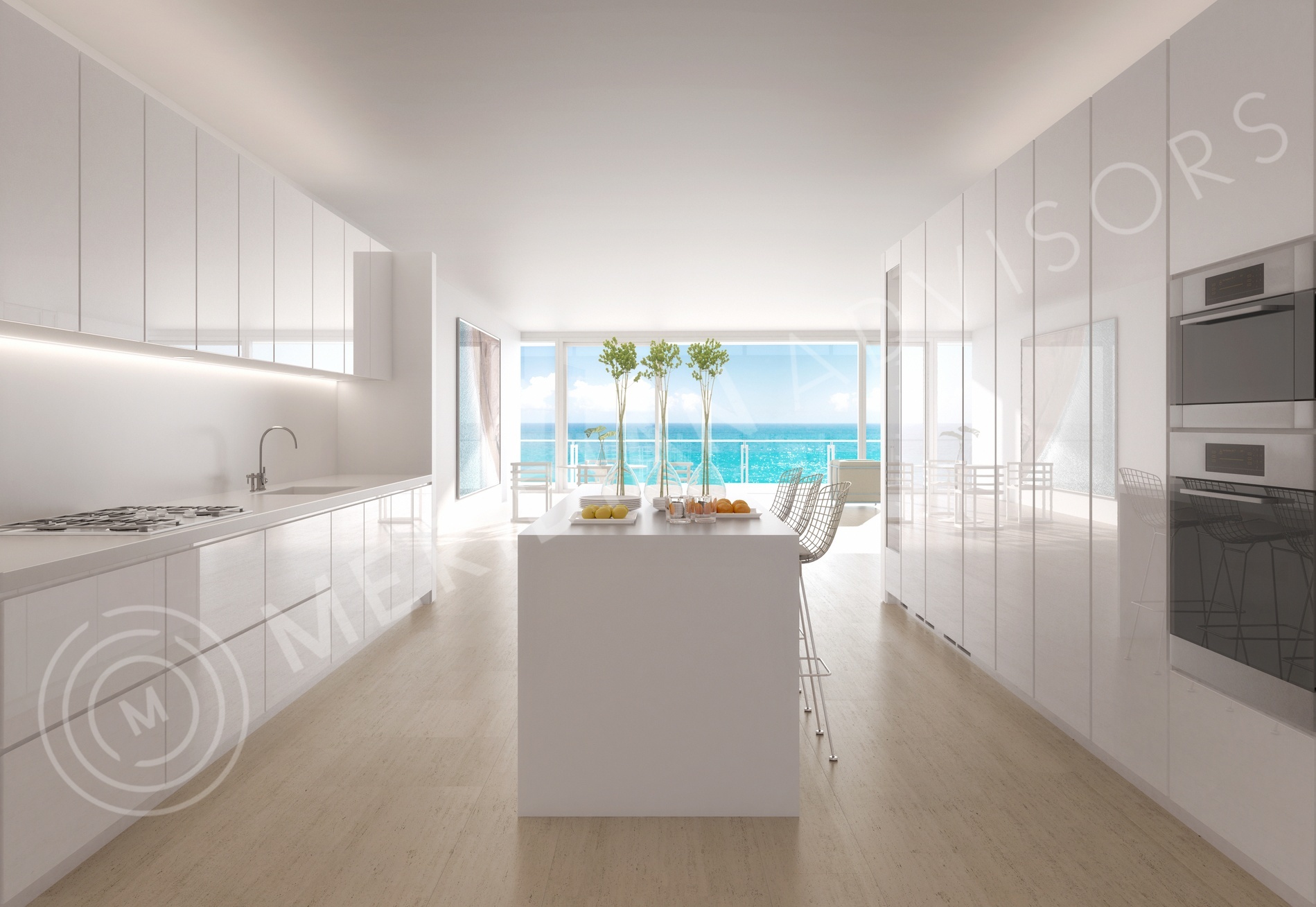 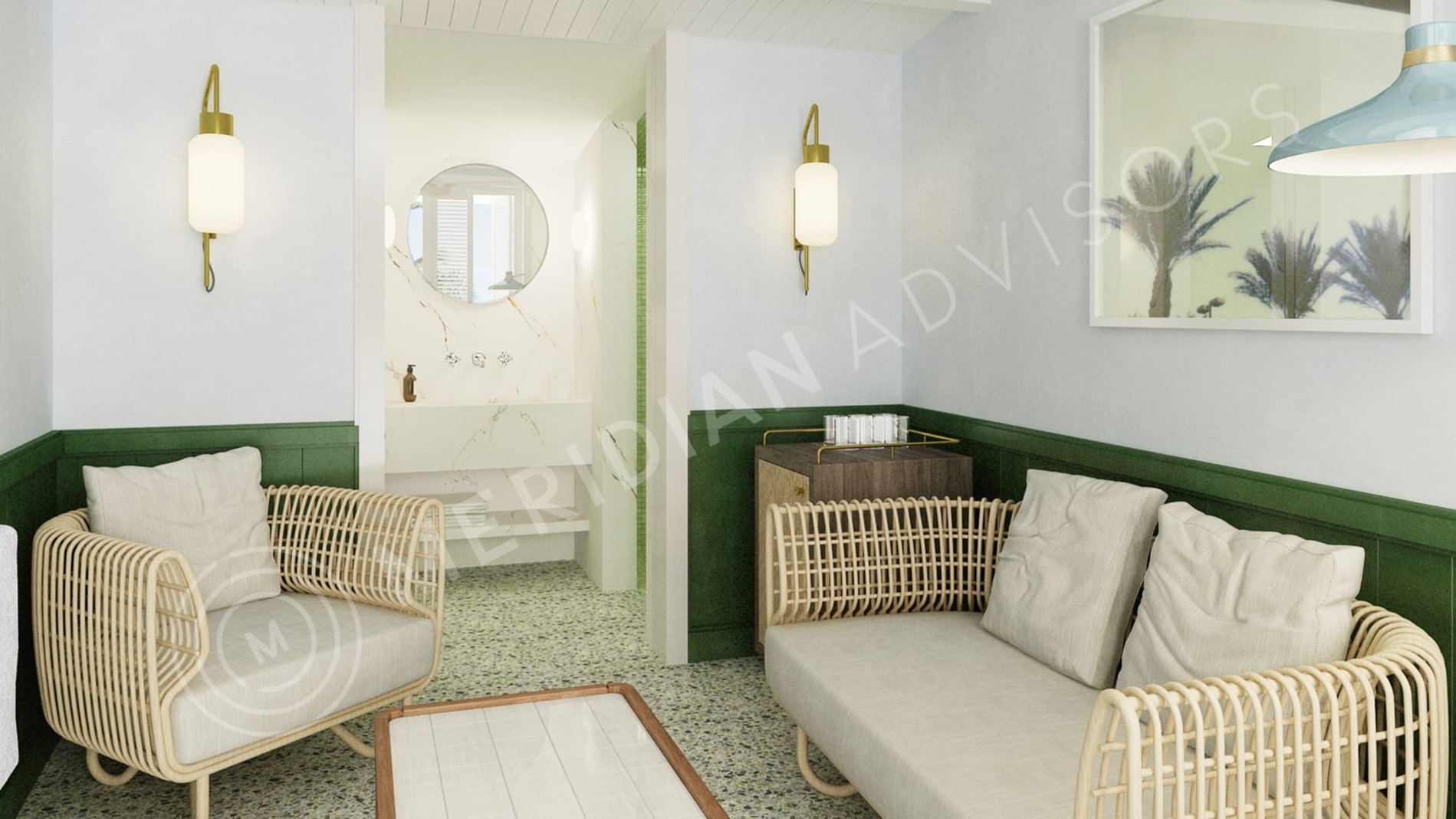 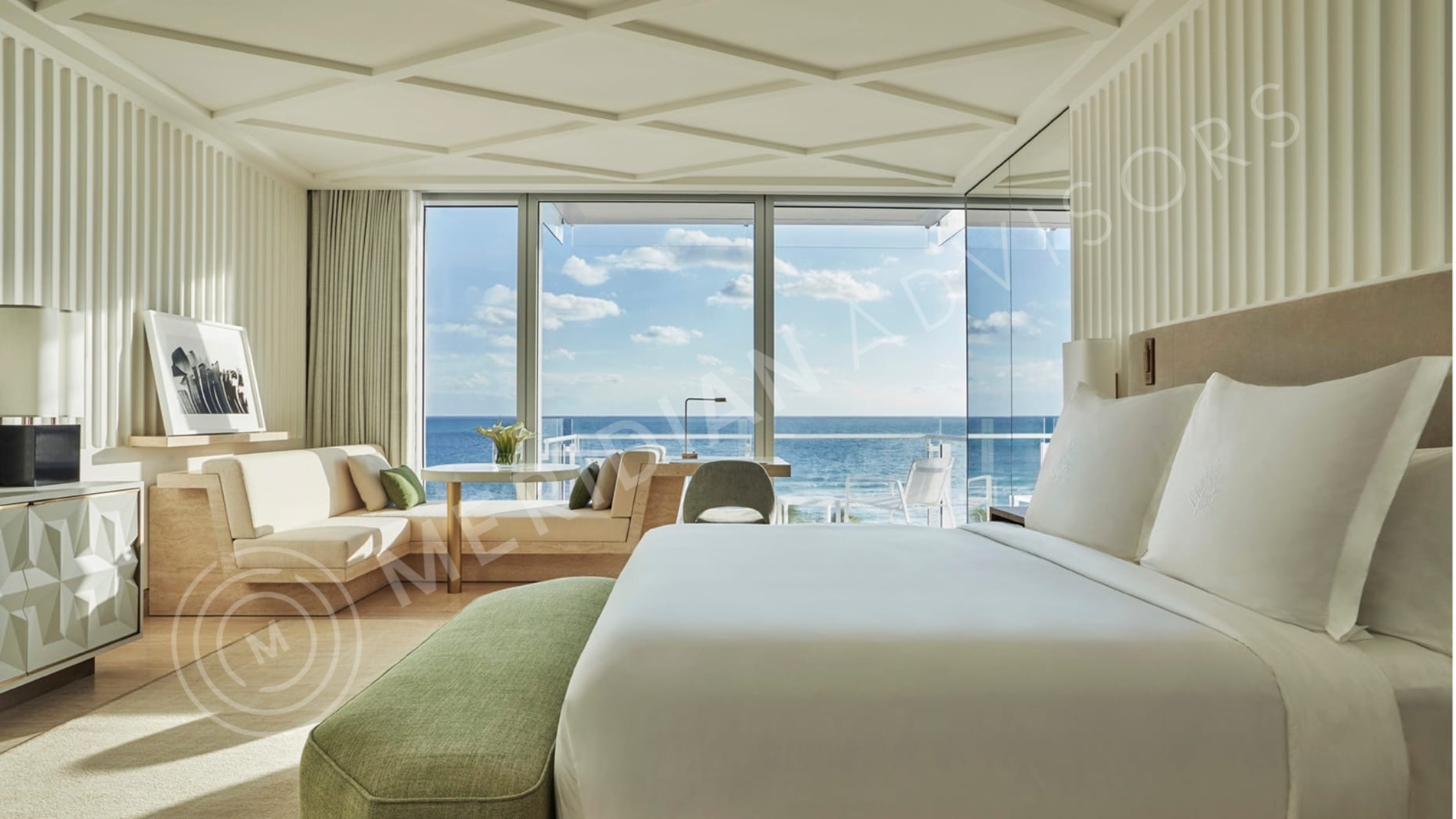 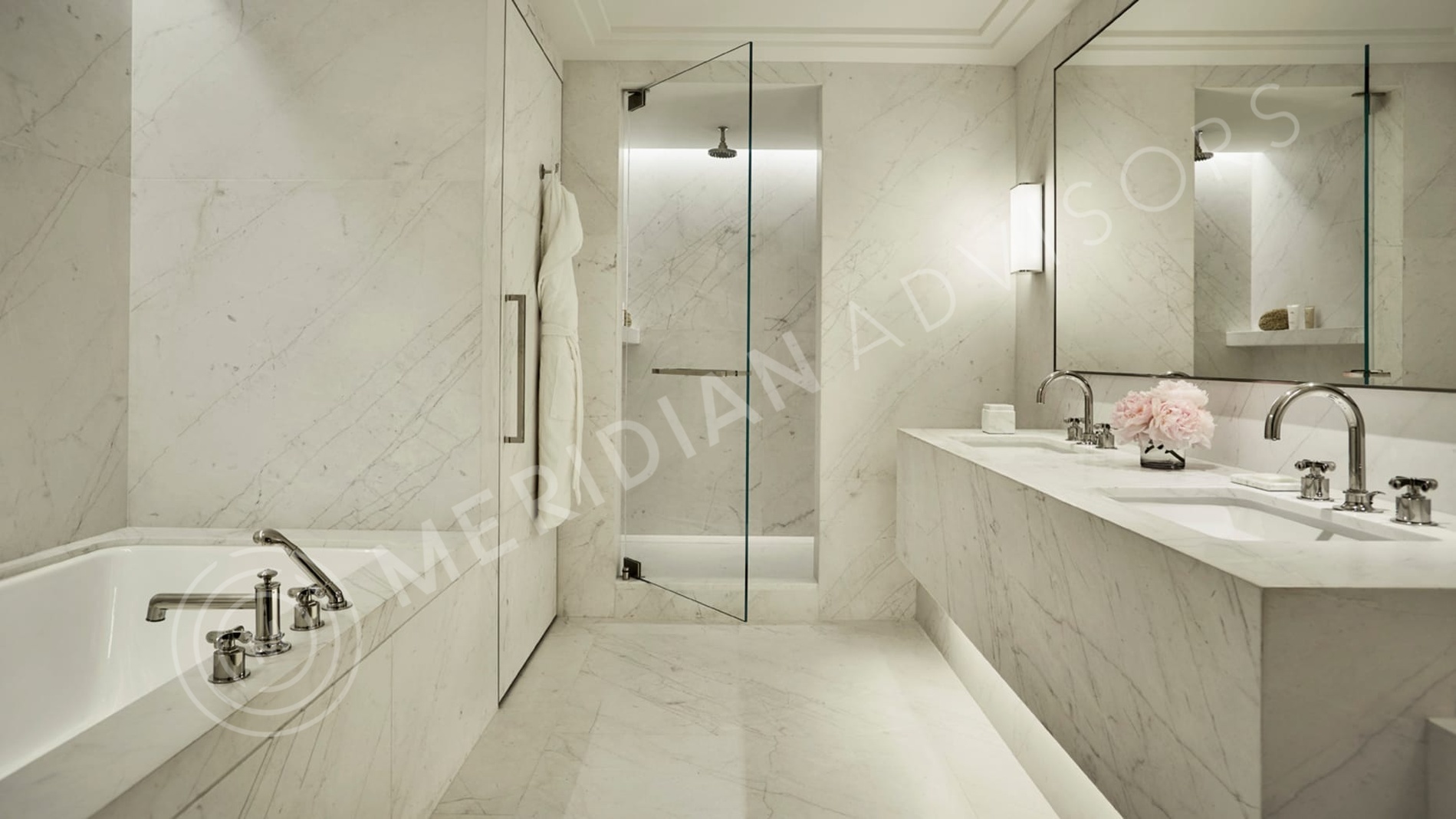 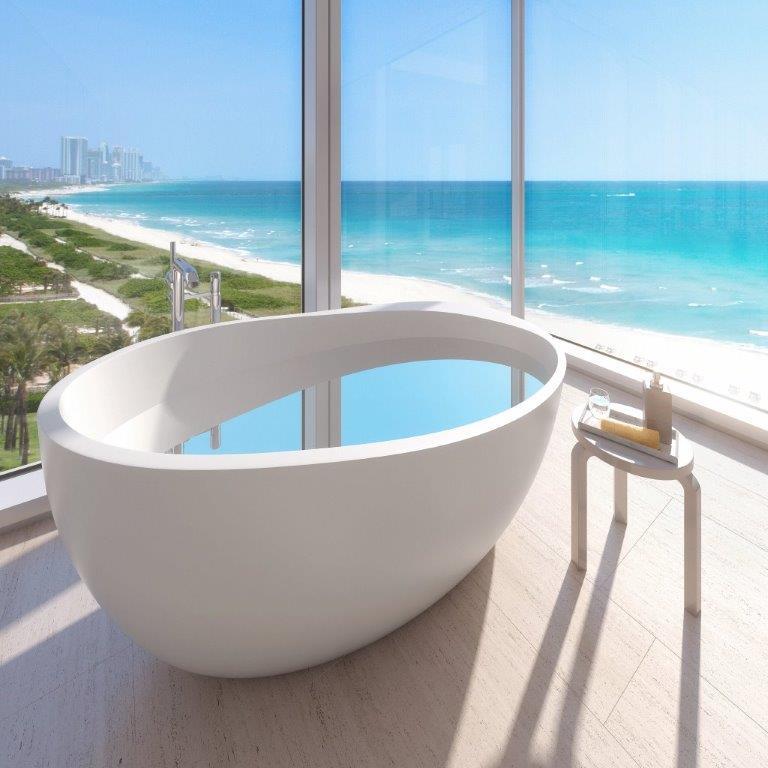 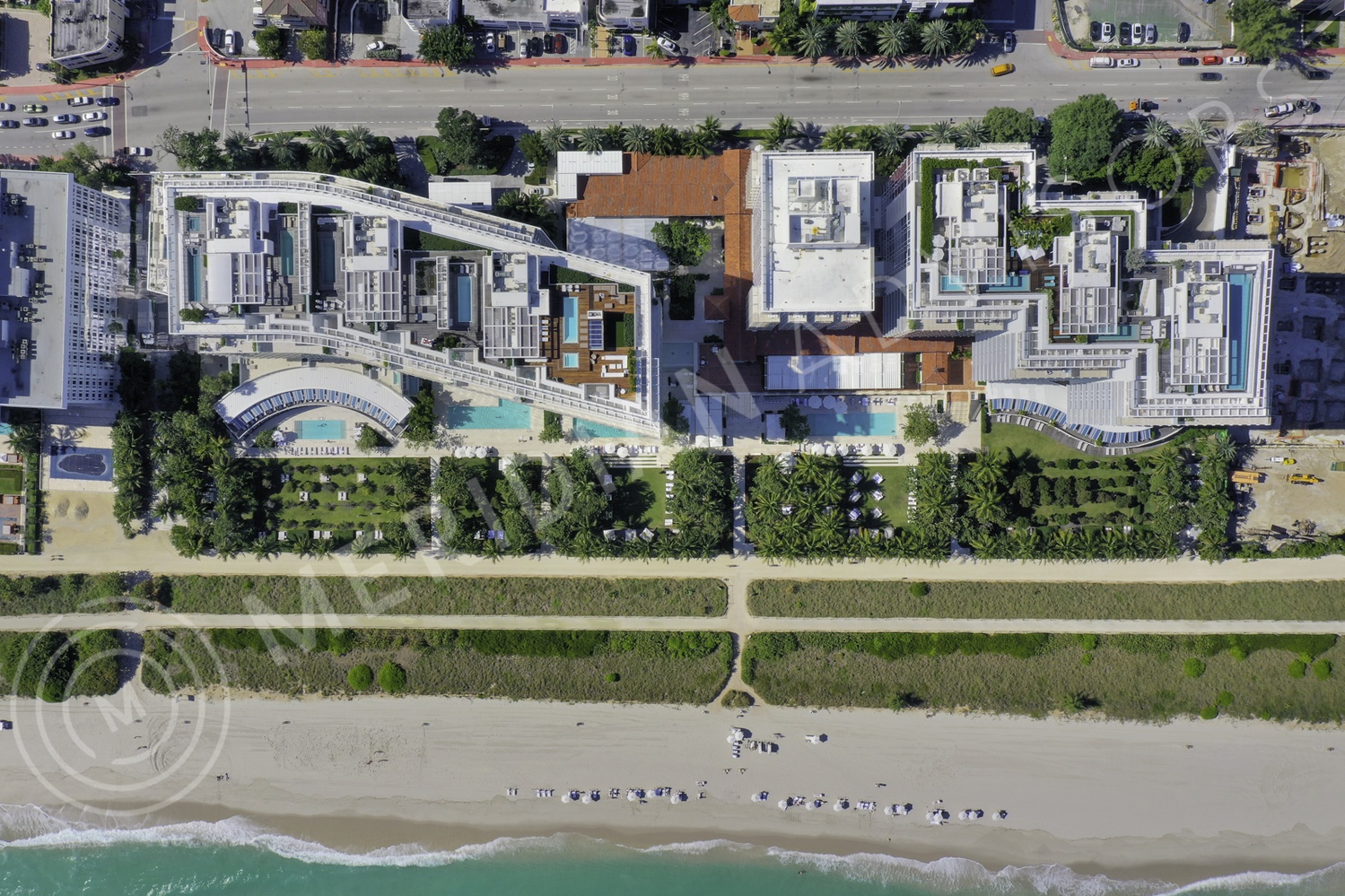 The Surf Club, a storied Miami institution, and its landmark historic building were recently joined by three new structures, consisting of a Four Seasons hotel flanked by two Four Seasons residential towers, creating a tiara of contemporary architecture rising above the original structure. Combining a long history of excellence with modern-day standards of luxury, exclusive Four Seasons service is provided to every occupant of the property’s 77 hotel rooms, 120 residences, and 30 hotel residences, spread over the property’s nine oceanfront acres.

Both the Four Seasons Hotel and Private Residences were designed by Pritzker Prize-winning architect Richard Meier, who is perhaps most famous for his Getty Center in Los Angeles, among hundreds of important projects he has realized over his long career. Billed as a prestigious residential address with all the amenities and privileges of living at a grand hotel, the private residences range from 1,800 square feet to 7,800 square feet in size. With luxuriously appointed interiors by Lee Mindel, these exclusive homes feature private elevator entries, floor-to-ceiling impact-resistant walls of glass, and up to twenty-foot-high ceilings. With fifty-one unique floor plans to choose from, the residences offer magnificent and expansive living spaces and unobstructed views of the Atlantic Ocean and Biscayne Bay. Meanwhile, hotel residences feature custom Joseph Dirand-designed furniture, making them absolute show stoppers. Owners of these exclusive apartments have the option to participate in the Four Seasons hotel program and earn income on their investments when not personally using their units.

Downstairs, the two residential lobbies offer a signature Four Seasons arrival experience separate from club and hotel guests, where you’ll find the Four Seasons concierge at your service. Residents can avail themselves of the many bespoke services and amenities of the Four Seasons, including a la carte services such as a private butler, pre-arrival provisioning, housekeeping, in-residence spa services, in-residence dining services, and grocery delivery services.

Residents have access to everything the hotel and club have to offer, including the Surf Club Restaurant by Michelin-starred chef Thomas Keller, with its grand interiors, and serene oceanfront exterior dining areas. Residents are free to indulge in the Four Seasons spa and fitness center, and take advantage of the Four Seasons Kids for All Seasons program, a haven for young tots lucky enough to call the Four Seasons home if only for a night. And of course, the Surf Club’s spectacular public rooms and courtyards, forty beach cabanas in a restored cabana structure, and luxurious pool and beach services are sensational places to entertain or enjoy a private poolside afternoon at home. The private club itself, soon celebrating its one-hundredth birthday, is still going strong, with Surf Club residents and non-residents alike as members.

Buyers are willing to pay a premium for units in Surf Club. If you are even considering selling your condo, we'd love to help you maximize your equity. Get started by requesting a free home evaluation to see just how much your home is worth in today's competitive market!

Questions? We can help.